As the world’s tech companies gathered in Barcelona Monday 22 February until the Thursday of Mobile World Congress 2016. Brand Finance released its annual review of the state of their brands, the Brand Finance Tech 100.

WeChat increased its brand value by 83% this year, making it one of the fastest growing brands in the technology table. The messaging app, also offers a payment platform, it’s rapid growth, registered users totalling an astonishing 1.1bn, of which 100m base outside of China.

Tencent, the holding company that owns and operates WeChat, recently announced that WeChat will start charging its users for payment transactions in March 2016, a move that could boost revenues even higher. 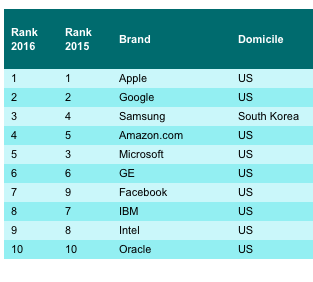 Apple Not Rotten Yet

With a value of R2.3 trillion Apple remains the world’s most valuable brand. Despite annual predictions of a fall from grace, brand value is up 14%. Revenue for the last three months of 2015 was a record-breaking R96,2 billion. There has been much disappointment about slowing growth, this must be seen in the context of an exceptional period at the end of 2014 following the release of the iPhone 6. To not just maintain but increase sales in a saturated market is encouraging and assertions that Apple has gone rotten are premature.

Samsung’s brand rating has been restored to AAA this year, which indicates the strength and future potential of the brand, this is thanks in part to the positive reception of the Galaxy S6. The significantly improved design also put the Galaxy S6 on the radar of iPhone users. The unveiled Galaxy S7 looks to follow the footsteps of its predecessor but adds features such as water resistance, extended battery life and expandable storage option. Revenues improved this year, most coming from Samsung’s semiconductor business which produces chips for most smartphone manufacturers, including, ironically, Apple.

Uber established itself in the top end of this year’s technology table with an impressive brand value of R175bn. This makes the app’s brand more valuable than giants such as Panasonic, Dell and Sony.However challenging times could lie ahead.

Uber continues to face regulatory challenges in the west, as the company is bombarded with protests and lawsuits from taxi unions and transport authorities while in the east, the company struggles to turn a profit due to fierce competitors, such as Didi Kuaidi, the favoured low-cost ride company in China.

As the world’s tech companies gathered in Barcelona Monday 22 February until the Thursday of Mobile World Congress 2016. Brand Finance r...